The Louie B. Nunn Center for Oral History’s “From Combat to Kentucky Oral History Project”  is an ongoi

ng oral history project documenting Kentucky’s student veterans and their individual experiences during the Iraq and Afghanistan Wars. Interviews will focus on each veteran’s military experience as well as their transition back into civilian life, particularly into higher education. 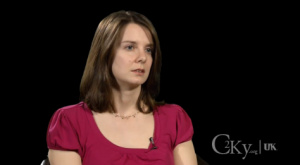 Stephanie Murphy joined the Army Reserves in 1998 at seventeen, served as a surgical technologist in the Iraq War, and joined the Air Force as a medic after returning to the United States. In this interview Murphy describes her decision to join the reserves, her experiences in boot camp and training, and being deployed in the middle of her undergraduate studies. She describes her experiences as a surgical technologist in Iraq, speaks specifically about medical practices in emergency situations, and discusses the military before and after 9/11.  In addition, Murphy describes challenges she faced coming back to the United States, transitioning to a campus community, and the role of women in the military.